How to teach ELT students to Describe People 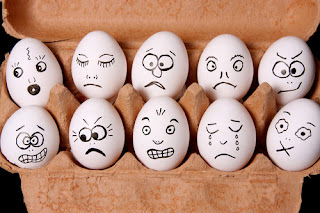 In the first part of the series, we learnt about how to assist second- language learners to talk about themselves. Taking the same context one step ahead, we find that many times learners can not accurately describe themselves as well as others. Learners talk and write on the topic 'About Myself' from nursery classes, still many times learners fail to leave an impact while describing themselves. They don't know what information would be appropriate according to the context in which the other person wants to know about them. As a result, they end up telling too many unnecessary things and miss the opportunity to leave a mark in the other person's mind.

The teacher needs to tell the learners in short about various ways of describing people. There are two important things which need to be mentioned whenever we describe a person:
1. physical attributes such as facial features, build, height, weight, complexion and so on.
2. emotional qualities such as attitudes, moods, positive habits(strengths) and limitations
The teacher can further  simplify this and tell them that the body, the mind and the heart of a person play an important role in describing the person. While the physical appearance may be important for a police officer to catch hold of a chain- snatcher or a thief in a market, a person's attitude towards life may be more important to a company's owner while hiring a secretary. Hence it is important to learn how to describe peoples' physical features as well as their emotional state.

Here is a simple activity based plan to make second language learners understand how to describe people in different ways.

The vocabulary of this lesson plan focuses on words used to describe people i.e. adjectives. The teacher can encourage the learners to use them with naming words i.e. nouns. For instance: an old handsome man. Special emphasis can be given to explaining the right order in which these words will be used with nouns. (this topic will be covered separately in coming series.)The teacher can make judicious use of mother tongue if students fail to comprehend the meaning of words.

The following activity will be done in groups of five- six students each.

Step 1: The teacher is to give the students of both the groups a total of five to six cards i.e., one card for one student each. One group will get printed cards whereas the other group will get blank cards.

Step 2: The group which has the printed cards will come ahead and one by one read out the card.

Step 3: The students of other group will draw a picture of the person described on the blank card. The drawing is not to be shown to the other group.

Step 4: Once all the students of group one have read out their cards, both the groups will submit their cards to the teacher.

Step 5: Now the teacher will display the drawings on the pin-up/ flannel board.

Step 6: Then, the teacher will ask each the student who has made the drawing to describe what s/he has made.

Step 7: If it matches with the description on the printed card, the teacher will pin up that card on the board next to the drawing. 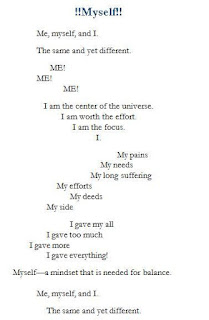 Note for teacher: The students can be given following dialogues to begin the role-play.

The teacher can make picture description cards with the following text and give the students some blank cards to draw matching drawings of people.

Ask a few learners to describe their siblings, their friends and /or parents. Review any common pronunciation problems the learners had.

This activity can be done in pairs/ individually. Ask the students if they watch cartoons? Ask them which their favourite cartoon character is. Ask them if they watch the cartoon serial where a dog is always getting in the way of ghosts and mummies. Tell them that they are going to do an interesting exercise about a group of friends and their dog and how they solve crime. Give the students the copies of handouts on Scooby Doo characters and their descriptions and ask them to match the characters to their descriptions. If they are interested, you can ask them to draw or colour them in their usual way or in a way which they would want them to dress.

This activity is to be done in pairs where one person will act as the one asking questions rapidly without much pauses and the other one answers immediately. The teacher is to note the time taken by each pair and the pair that takes the shortest time to complete the activity, is to be declared the winner and given some reward as an appreciation. 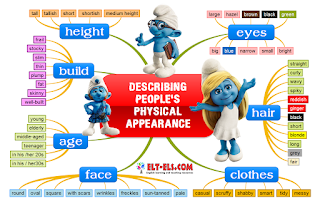 Ask the students to write a short passage of about 8-10 sentences about the following and read it out in front of the class.

2. Tell us something about your best friend.

3. How would you describe the naughtiest student in your class?

4. Describe what you like about your Art Teacher.
Based on the age-group and  level of the second language learners, the teachers can vary the time given to conduct an activity in this plan.

This plan is made for a beginner's level and you will find that it focuses more on physical descriptions and a little bit about likes and dislikes of people.